Spinal Muscular Atrophy (SMA) is a rare genetic disorder affecting the motor neurons of the spinal cord and causing muscle weakness, damage, wasting (atrophy) and eventual loss of function. Children with SMA may have difficulty crawling, sitting, walking, and moving their limbs and neck. Their ability to breathe and swallow may also be affected.

People with SMA have a mutation (change) in their Survival Motor Neuron (SMN) gene. Parents of children with SMA have no neurological problems themselves and are generally not aware that they carry the SMA gene until they have a child with SMA.

SMA is a very complex disease, affecting each child differently. With the recent development of disease modifying treatments the way we describe the different types of SMA is changing. We used to refer to the three types as SMA types 1, 2 and 3 (as described below), but these terms are now becoming less useful. We now think more in terms of motor milestone achievements and use the classification of non-sitter (unable to sit without support), sitter and walker.

Traditionally the  three common types of SMA, were classified based on the age of the child when they first have symptoms.

Also referred to as infantile-onset, this is the most severe form of SMA. Symptoms may be present at birth or develop within the first few weeks or months of life. They include severe weakness or “floppiness”, poor head control, weak cry and cough, and difficulty with swallowing and feeding.

People with SMA type 3 develop symptoms sometime between the age of 18 months to teens or adulthood. It is a much milder form of SMA; mobility is affected, but progression is much slower. Patients have variable muscle weakness, cramps and fatigue. Some people with SMA type 3 can walk independently; others require assisted mobility devices. SMA type 3 is sometimes classified as 3a (onset of symptoms before 3 years of age) and 3b (onset of symptoms after 3 years of age).

The advent of gene and genetic therapies to successfully treat SMA has changed the natural history and severity of weakness seen in the condition. Classification of SMA severity now focuses on motor milestones achieved rather than symptom onset. We recognise that this is not a perfect system for grouping patients as there will be significant variation is skills within these groups, but it is an overall more usual way of grouping patients than the traditional types.

Patients with infantile-onset SMA commonly show symptoms of SMA around two to four months of age and will not independently develop the ability to sit without any support. This group of patients is the most common, accounting for around 60% of all newly diagnosed patients. This group of patients are also the most severely affected, being prone to difficulties feeding and gaining weight and being more susceptible to breathing problems such as chest infections and weakness of the breathing muscles.

Patients in this group either have achieved this milestone through use of disease modifying treatments and allied health therapy or have later onset of symptoms after they have attained walking.

How SMA affects a child depends on when the disorder first causes symptoms. Early signs of SMA include muscle weakness, poor muscle tone and floppiness, with the legs usually weaker than arms. Babies who are affected may have feeding or breathing difficulties and a weak cry.

When SMA signs are present early on, children may miss developmental milestones, such as rolling over, crawling, sitting without support, and walking.

SMA symptoms are progressive, causing increasing weakness in the muscles of the limbs and chest, making breathing progressively more difficult. Weakness of the breathing muscles is the most serious complication of all forms of SMA, especially in children.

It is important to note that SMA does not affect all parts of the body. Intelligence is unaffected and children with SMA attend mainstream schools with physical assistance.

In the past, the treatment of SMA has been based on the management of its complications; muscle weakness, feeding problems and breathing difficulties, joint contractures and scoliosis.

More recently, several novel therapies have been shown to improve strength and motor function in children with SMA type 1.  Nusinersen (Spinraza) has now been licensed in Australia for treatment of children with Type 1, Type 2 and Type 3a SMA.  Nusinersen works by improving function of the SMN gene. In some cases progression of the disease is halted by treatment with nusinersen; in other children motor function may actually improve.

Couples with a family history of SMA are at increased risk of having children with SMA. Prenatal testing can clarify this risk. Talk to your obstetrician, neurologist or geneticist about this.

SMA is a difficult condition for families to live with, but your multidisciplinary care team has a lot of experience in helping families and individuals cope with diseases like SMA, and can help you.

Support groups and counselling can be a great source of comfort and information, and are available to all families.

Below is a list of topics that have been compiled by Australian neuromuscular healthcare professionals to teach you more about SMA. Each topic has multiple pages and resources for you to read through. Click on each heading to see a brief overview of each topic and a link to learn more. If you have any questions about the information presented below, please speak with your doctor or your hospital's neuromuscular nurse.

Over the last five years there have been very exciting developments in treatment for spinal muscular atrophy, which has resulted in a paradigm shift in the care and expected outcomes for patients diagnosed with SMA. Please click on the button below to learn more about disease modifying treatments for SMA.

Medication used to treat the symptoms of SMA, in combination with a gradual decline in activity, means that people with SMA may struggle to maintain a healthy weight. Maintaining healthy nutrition, and managing and preventing excessive weight gain, are vital components of daily care for patients with SMA.

Children with SMA may have some trouble with everyday tasks. Occupational therapists work together with patients and their families to achieve their goals by building skills, making changes to activities and/or the environment, and providing specialised equipment or aides.

An orthotist assesses, designs, and manufactures orthotics (braces or splints) for all parts of the body. For children with SMA, a splint may help maintain positioning of a limb (lower leg or wrist) or may support trunk posture, as in a spinal brace.

Regular movement is important to keep you or your child mobile, healthy and well. Through their knowledge of the structure of the human body and its movement, physiotherapists can help children and young people with SMA maximize their physical abilities.

Extra Resources for Families and Children

The following page is a list of all of the documents that have been featured in the topics listed above. You may wish to read and download these resources for you and your family. Please click the link below to find this list of documents. 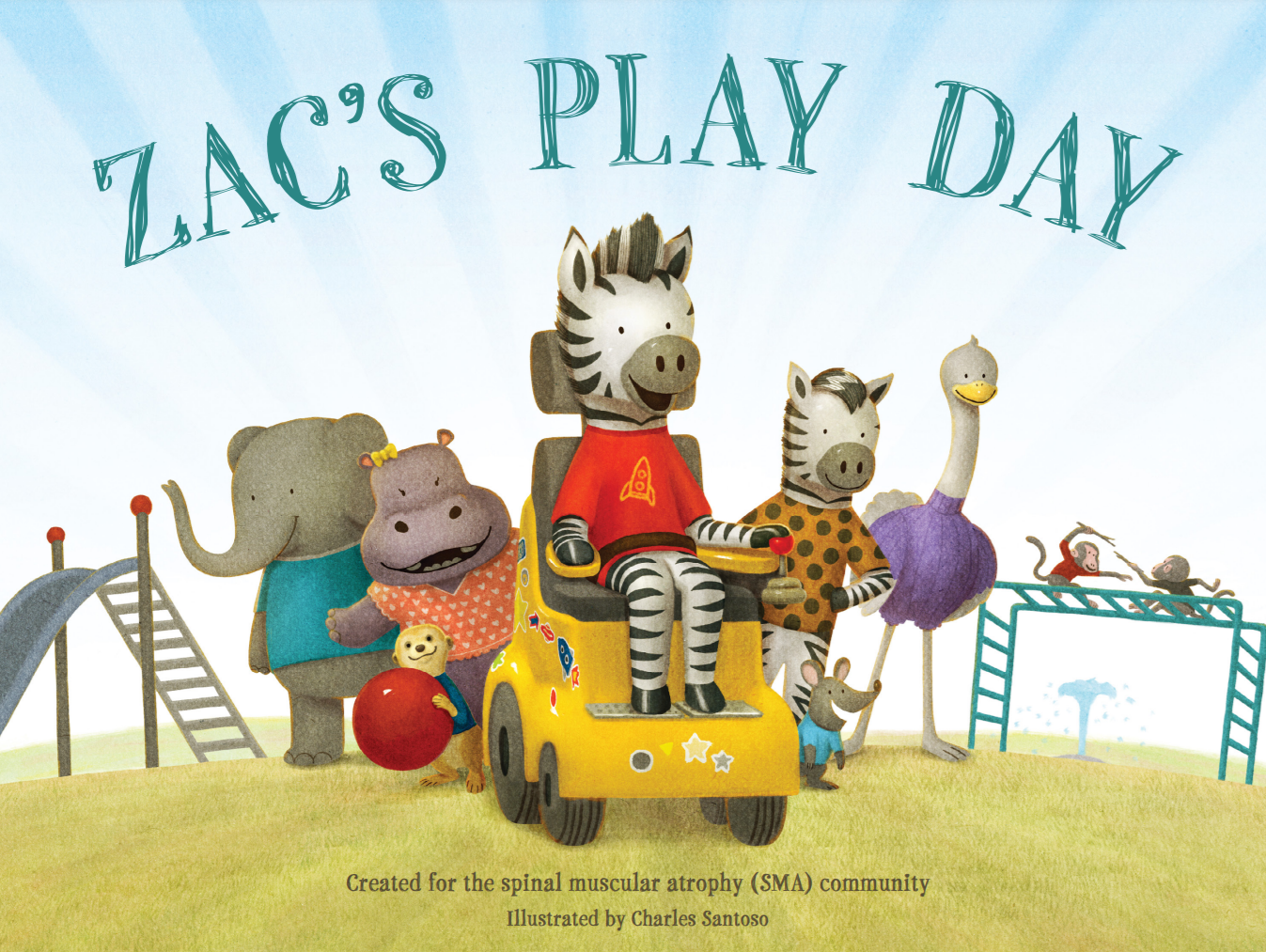 Zac's Play Day is a picture book for children about SMA. Click on the image above to read a PDF of the book. We thank Biogen for creating and sharing this resource.

By continuing to use this site or closing this panel, we'll assume you're OK to continue. You can view our full privacy policy here