Gene therapy is an exciting new approach to treating genetic conditions. Early trials in some conditions have had very promising results, and so this treatment is providing hope of better outcomes in the future for these patients. But unfortunately is still in early development for most conditions, will not be an option for all diseases and is not a cure for the condition. This page will provide some information about gene therapy.

This is an introductory video on the basics of gene therapy created for patients and their family by the American Society for Cell and Gene Therapy. For further information about the ASGCT click here.

What is gene therapy?

Gene therapy is the name we give to a therapy that treats a disease or condition by changing the way the faulty gene involved works. There are several different ways this can be achieved. Most often, when we refer to gene therapy, we mean giving a functioning gene to the patient to replace the faulty gene. We do not remove the old gene, but instead the new gene sits in the cells of the body and produces the missing protein.

There are two main ways of delivering the new gene into the body: 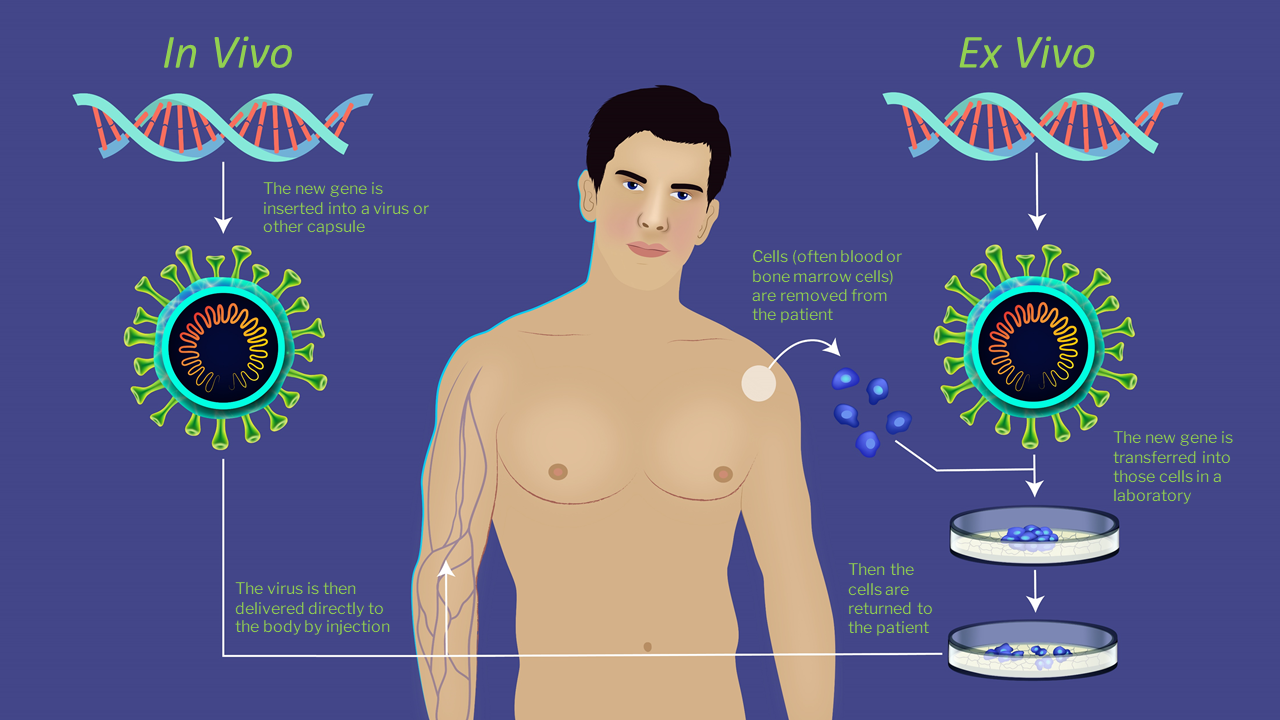 There are risks and benefits to both methods and different conditions are more suitable for one type than the other. In this information sheet we will focus on in vivo gene therapy using a viral delivery vehicle, or ‘vector’.

Our genetic information is determined at the time of conception. Diseases caused by poorly functioning genes are usually not curable with traditional medications. Gene therapy directly targets the underlying causes of genetic disorders with an aim to decreasing their severity or possibly even curing these disorders. In most cases only a single dose of gene therapy will ever be administered.

In viral vector gene therapy, the missing or malfunctioning gene is replaced with a new copy packaged into a viral shell then injected into the patient. The shells chosen for this purpose have been selected because they can target the organ affected by the disease, and they have been altered so that they do not cause disease themselves. Viral gene therapy is most often administered intravenously but is occasionally injected directly into the target organ.

What conditions are treated with gene therapy?

In theory, any of the 4500 conditions caused by malfunctioning genes could be treated with gene therapy. Most gene therapies under development at present target the brain, nerves and muscles (neurological), eyes (ophthalmological), liver or blood. It is likely that many more gene therapies will be developed in the next 5-10 years.

What are the risks of gene therapy to the patient?

What are the risks of gene therapy to a patient's carers or family?

Patients who have received gene therapy may shed the virus in their urine, saliva and stool for up to two months after the procedure. This is not dangerous for their families and carers - as the viruses being used do not cause disease in humans- but we want to avoid other family members developing immunity to the virus as this could affect their own ability to receive gene therapy in the future. For this reason, we recommend parents of babies in nappies wear gloves when changing nappies and be careful to wash their hands well afterwards. Friends and relatives with the same medical condition should not have contact with a patient for at least two months after the patient receives a gene therapy.

What are the risks of gene therapy to staff?

There is no risk to staff caring for a patient receiving gene therapy. The virus delivering the gene is not known to cause problems in pregnancy and the treatment will not have any effect on members of the public who do not have the condition being treated. Spills of the treatment fluid on skin are not harmful; these can be washed off with soap and water like any other medication spill. A patient who has received gene therapy is not infectious; they do not need to be isolated or managed in any special way. Their urine and stool can be flushed into waste as normal. Nappies should be disposed of as per local guidelines.

Can I have gene therapy more than once?

Within hours of the gene therapy being injected into the patient, their body starts to produce antibodies to fight the virus. This means that repeat doses will be ineffective as the patient will be immune to the viral vector.  At the moment, therefore, viral vector gene therapy can be administered only once in a patient’s lifetime.

Where can I find more information about gene therapy?

The best way to find out more information is to ask your treating doctor. There is a lot of information available on the web and so it can be quite confusing. The best thing is to ask your doctor if gene therapy is an option for you.

The American Society of Cell and Gene Therapy have some good information and resources on their website, which can be found here.

By continuing to use this site or closing this panel, we'll assume you're OK to continue. You can view our full privacy policy here